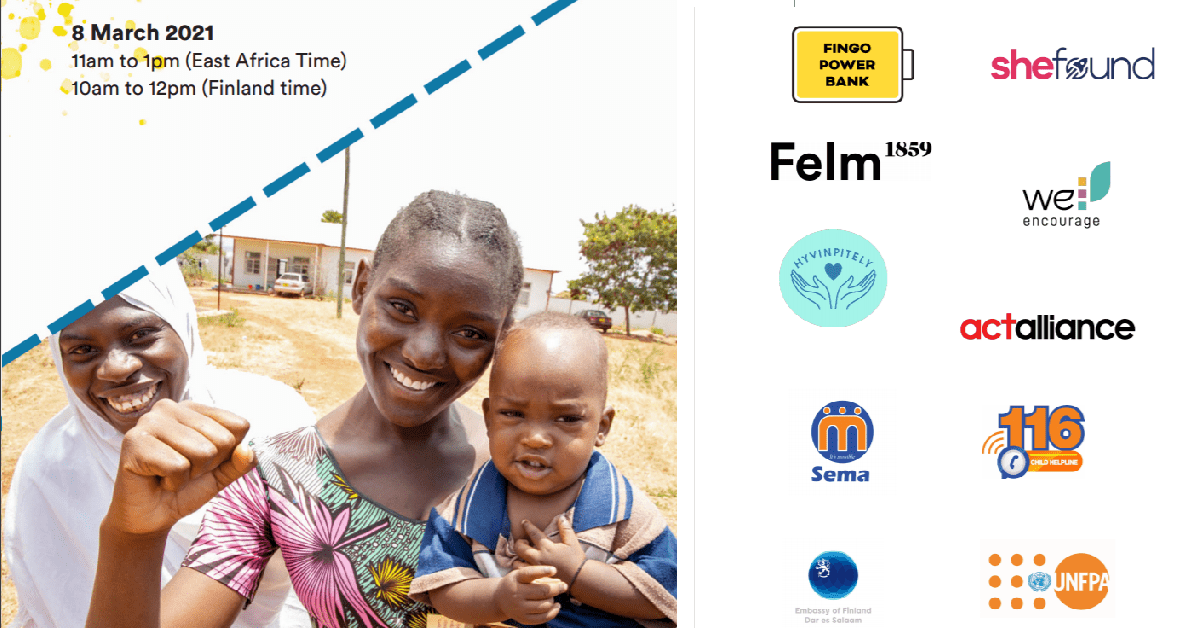 This was the first time these organizations worked together. Photo: Karlien Truyens / UNFPA

Violence against women is a global issue that affects millions of girls and women. Finland and Tanzania are no exception. On March 8, 2021, Felm convened organizations and individual experts working in intimate partner violence prevention and response to a virtual event to share good practices in the two countries and to discuss how technology could help reach more people affected by violence, as well as to prevent violence.

The speakers presented a diverse set of approaches. Hyvinpitely is a Finnish startup specializing in discussion support for people experiencing intimate partner violence. C-Sema is an NGO but also manages Tanzania’s National Child Helpline. We Encourage is a Finnish low-threshold support chatbot service, and SheFound supports Tanzanian women entrepreneurs. These were all services presented during the meeting.

Katja Kytölä, one of the presenters, noted how she was impressed by C-Sema’s Helpline related presentation.

– It is great to hear that there is a dedicated National Child Helpline that also responds to gender based violence, and specialised desks set up by the Tanzania Police Force, Kytölä noted after the seminar.

There are 420 police stations in Tanzania that have Gender and Children’s Desks that deal specifically with violence against women and children. Many of the police officers have received training in the provision of psychosocial support at the University of Iringa, a training program that was funded by Felm.

Patricia Mwaikenda, who works as a program director for the Evangelical Lutheran Church in Tanzania, notes that while the church is involved in anti-violence work, this was her first time hearing about chatbot services that support those who have experienced violence. She was also thrilled about the consultations that have taken place between stakeholders, different religions and service providers to address violence.

– It was great to hear that women living in remote areas have also been involved in the work of many organizations, Mwaikenda says.

Jacqueline Mahon, UNFPA Tanzania Representative, the UN agency for sexual and reproductive health, also spoke. The opening greeting was given by Teressa Juhaninmäki, Regional Director for Eastern and Southern Africa at Felm, and the final thanks were expressed by Finland’s Ambassador to Tanzania Riitta Swan.

In addition to the presentations, each participant was able to share their successes and collaborative ideas with the help of digital sticky notes. The discussion revealed that there are many overlaps, and many organizations could benefit from increased collaboration. The discussion was moderated by London School of Hygiene and Tropical Medicine based researcher on violence Lottie Howard-Merrill and Finnish Anna Juusela from We Encourage.

Anna Juusela enjoyed the networking with like minded organisations and private sector actors at the event.

– I found many new possible partners to perhaps pair up with to expand our service that is currently under development. I am really looking forward to similar events in the future, Juusela says.

The idea of ​​the Women’s Day webinar was not only to bring experts together, but also to set up a network for those interested in the topic, where the sharing of experiences is foreseen to continue. The next event has already been agreed upon: In April, the network will receive training on the use of open source maps in supporting the work of responding to violence.

The convener of the webinar, Anna Holmström, who works as a Child Rights Advisor for Eastern and Southern Africa at Felm, would like to see more collaboration both within Tanzania and between Finland and Tanzania. She sees great value in Felm’s programmes that reach even very remote areas and the partners that support extremely marginalised women, like those previously engaged in sex work and adolescent girls with albinism, for example.

– I am so proud of the work that Felm has accomplished to improve the lives of the most vulnerable girls and  women of all.

The newly established network is timely, last year Finland was elected as one of the chairs of the sub-coalition on technology and gender equality, as part of UN’s global campaign Generation Equality.

– Now, more than ever, we should share our thoughts on ensuring that  services that help the lives of girls and women utilize new technologies, for maximum reach and impact, Holmström says.